Never trust a man who says he knows what the meaning of life is. That is unknowable, and maybe nonexistent. However, I know damn well what the point of life is: to procreate, and in so doing, fornicate. To the best of our scientific knowledge, six billion years of evolution has gone into making all of us, men and women, want to bang. Often. The urge to fuck is one of the most basic, relatable mental processes in the world, and one intimately related to love — the subject of more songs and poems than any other subject (my money is on war in second place, and just plain physical sex as a close third). And yet, somewhere along the way, it became un-hip to write music about sex, at least too overtly.
But let’s cut away the bullshit. There is nothing wrong with cock-rock. Actually, cock-rock is kind of awesome. Enter the Afghan Whigs. The Cincinnati four-piece came into their own in the late ’80s and early ’90s alternative scene, a collective of bands that rejected the cock-rock ethos, and for good reason: The ’80s hair metal scene had taken sexual rock and roll to such extremes as to render it absurd. Unlike their contemporaries, though, the Afghan Whigs gloried in bacchanalia, making them unique among the bands they often shared labels with. On the other hand, their approach to cock-rock was distinct from the woman-devouring bands that preceded them.
You could call them progressive. The Afghan Whigs, and especially guitarist/vocalist/songwriter Greg Dulli, understood that even the most Caucasian rock is at its heart derived from African American music, and sexuality is an intimate part of that — they don’t call him Elvis the Pelvis without good reason. So while rock bands emulated rock bands, Dulli took things back to basics, taking his cues from soul and R&B music. While Kurt Cobain re-branded the hellish blues torture of Robert Johnson, Dulli glorified the melancholy-but-libidinous tunes of the Supremes, Barry White, and even TLC, albeit with a darker twist. Instead of blue-eyed soul, let’s call it black-hearted.
It was, and remains, a unique take on rock music, and today, even though the Afghan Whigs enjoyed some modest commercial success, their influence on modern rock and pop music is less than apparent. Bands like Interpol and Jimmy Eat World have earned the occasional comparison, but don’t really sound like the Afghan Whigs (the sole exception that comes to mind is Maroon 5’s critically underrated debut album Songs About Jane — had they continued in the soul-rock vein, I might still buy their albums).
When I counted down Josh Homme’s albums for Stereogum, a commenter said, “In a perfect world, Queens [Of The Stone Age] and Afghan Whigs would have conquered the charts instead of Creed and Nickelback.” I’m inclined to agree with him — and a little surprised that the Whigs never reached arena status. They have the songs, the hooks, and later in their career, the production value. Cynically, it might have something to do with the band’s aesthetic (there was a classic fanzine called “Fat Greg Dulli,” if that tells you something). But more realistically, I think their uniqueness became a detriment. Standing out in a crowd is good for a job search, but bad for rock superstardom, leaving the Whigs in a genre of solitary confinement.
Of course, the Whigs were born when Greg Dulli (supposedly) met lead guitarist Rick McCollum in an Athens, OH jail cell, after being taken into custody for disorderly conduct. The band assumed regular operations in Cincinnati, which begs the question: What exactly were the two doing in Athens? The same thing everyone does in Athens: getting drunk and disorderly (as proof, research the Ohio University’s Halloween celebration festivities). As a fellow Ohioan I can attest, this state breeds a special kind of asshole. We’re the state that keeps racist baseball mascots long past their expiration dates, and that glorifies its Big 10 football team’s ability to trounce their rivals from a smaller, better-educated Michigan town. Fuck small. Fuck educated. Of course my home state produced the world’s artsiest cock-rock band.
Eventually, the center ceased to hold and the Afghan Whigs called it quits in 2001, leaving Dulli to embark on a semi-solo career leading the Twilight Singers and doing a few albums with Mark Lanegan. However, recently the band reunited sans-McCollum, leaving Dulli and John Curley as the only permanent members of the band (a good thing, too, as Curley’s dexterous Rickenbacker-playing is as essential to the band as Dulli’s crass sexuality). Energized by a successful reunion tour in 2012, and a unique, popular set with Usher at SXSW in 2013, the band is back in action with a new record and another tour this coming autumn. It seems as though this decade might be kinder to Dulli and Curley than the ’90s were.
After all, the era of free love is over. The era of cheap sex, however, is here to stay. The Afghan Whigs’ subject matter is more relevant now than ever, and their music just as unique as it was when it was new. Next month, Sub Pop will release a book of Dulli’s photographs — alongside haiku by Danny Bland and calligraphy by Exene Cervenka — called I Apologize in Advance For The Awful Things I’m Gonna Do. So this is an apt time to look back at Dulli’s work with the Whigs … and apologize in advance for what we’re gonna do.

more from Counting Down

Music video by The Afghan Whigs performing Somethin' Hot. Football manager 2021 for mac. (C) 1998 SONY BMG MUSIC ENTERTAINMENT. 1965 by The Afghan Whigs Amazon.com. For close to a decade, Cincinnati-based alt-rock combo Afghan Whigs created music that hurt so good. Rooted in an emotive hybrid of self-loathing punk and exhibitionistic soul, the band's tunes writhed and roiled, cutting to the core of dysfunctional relationships.

1965 is the sixth studio album by American rock band The Afghan Whigs. It was released on October 27, 1998, by Columbia Records.[1]

The album was written and recorded after Greg Dulli, the band's lead singer and rhythm guitarist, underwent treatment for clinical depression.[2] The Afghan Whigs recorded primarily at Daniel Lanois' Kingsway Studios in New Orleans,[3] with additional recording done at Ocean Way and Larrabee North in Los Angeles, The American Sector in New Orleans, and London Bridge in Seattle.[4] Dulli produced the album and wrote most of its songs.[4] For the cover, a photograph was used showing astronaut Ed White on the first American space walk as part of the Gemini 4 flight.[5]

Reviewing for the Los Angeles Times in November 1998, Marc Weingarten regarded songs like 'Somethin' Hot' and 'Neglekted' as 'the ugliest sort of come-ons, full of innuendo and whispered imprecations', but concluded that 'Dulli's velvety vocals and the band's sharp, punchy melodies win you over every time.'[13]Entertainment Weekly reviewer Matt Diehl called Dulli 'one of rock’s finest lyricists: His noir vignettes read like a Jim Thompson novel, their erotic narratives expertly skewering the male psyche.'[8] Stubbs, in NME, hailed 1965 as 'a triumph against the grain of post-grunge',[9] while Jason Ankeny of AllMusic called it 'the gritty soul record just always out of The Afghan Whigs' reach—seamlessly integrating the R&B aspirations which have textured the band's sound since the beginning'.[10]

Some reviewers were less receptive. Robert Christgau assigned 1965 a 'neither' () grade in Christgau's Consumer Guide: Albums of the '90s (2000), indicating an album that 'may impress once or twice with consistent craft or an arresting track or two. Then it won't.'[17] In The New Rolling Stone Album Guide (2004), Joe Gross considered the album's upbeat tone and healthier thoughts on sexual relationships to be 'a mild letdown from the previous trilogy's relentlessness'.[2]

All tracks written by Greg Dulli except where noted.[4] 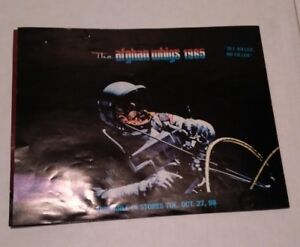