The definite article, 'the', is i in the singular: aran 'king', i aran 'the king'. These examples might just as well be Quenya. In an untranslated text in The Lays of Beleriand p. 354 we find the phrase ir Ithil. If this means *'the moon', it would seem to indicate that the article takes the form ir before a word in i- (to avoid two identical vowels in hiatus). However, since this theory was first advanced a new relevant example has been published. The Sindarin Lord's Prayer includes the phrase i innas lin 'your will' or literally *'the will of yours'. Here we do have i, not ir, even though the next word begins in i-. Moreover, the word for 'Moon', Ithil, seems to count as a proper name in Sindarin, so we would not expect it to take any article at all. Some therefore think the ir of the phrase ir Ithil is not a variant of the definite article 'the', but has another meaning. 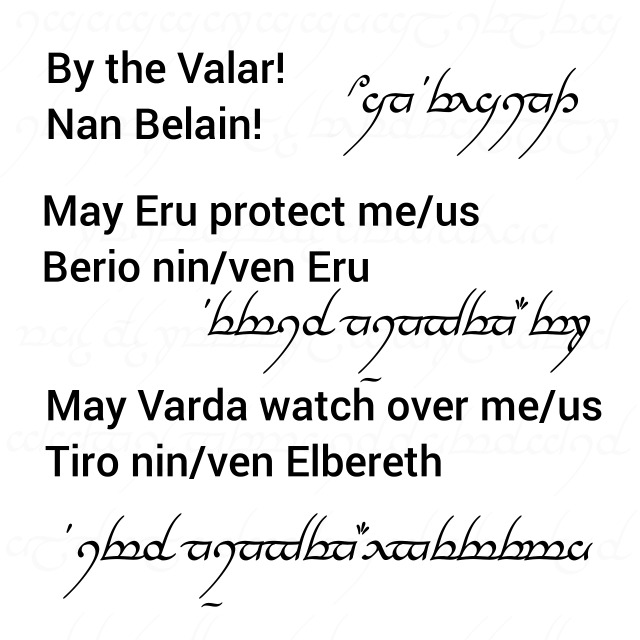 Unlike Quenya (and English), Sindarin has a special plural form of the article, in. 'Kings' is erain (formed from aran by vocalic umlauts, see below); 'the kings' is in erain.

Lesson 03: The Noun; Lesson 04: Plural Nouns; Lesson 05: The Plural Nouns; Lesson 06: Aorist Tense; Lesson 07: Nouns with Adjectives; Lesson 08: The Noun with 'Of' Lesson 09: The Copula; Lesson 10: Helping Verbs; Lesson 11: Words with Conjunctions; Lesson 12: Imperative Verbs; Lesson 13: Class Plural -ath; Lesson 14: Past Tense A-verbs; Lesson. So, the edits I made last time to the Sindarin plural-mutation lesson (chapter 5 lesson 1) embarked me on an odyssey to find out more. With the help of Roman Rausch on the Google+ community “Languages of Middle-earth” I present to you the newly edited and up-to-date version. In our first lesson, Lamaeron talks about pronunciation and how to write Sindarin using the Tehta mode of Tengwar. Be sure to turn on the subtitles by clicki.

In both the singular and the plural, the article may appear as a suffix appended to prepositions. This suffix has the form -n or -in. Thus the preposition na 'to' becomes nan 'to the'. Ben 'in the' or more literally *'according to the', a word occurring in the King's Letter, seems to be a preposition be 'according to' - not attested by itself - with the suffix -n for 'the'. (This be would be the Sindarin cognate of Quenya ve 'like, as'.) The preposition nu (or no) 'under' becomes nuin 'under the' (as in Dagor-nuin-Giliath 'Battle under the Stars', a name occurring in the Silmarillion, chapter 13). When the article occurs in the form -in, it may trigger phonological changes in the word it is appended to. Or 'over, on' turns into erin 'on the', the vowel i umlauting o to e (via ö; 'on the' must have been örin at an earlier stage). The preposition o 'from, of' appears as uin when the article is suffixed, since in Sindarin earlier oi becomes ui (cf. Uilos as the cognate of Quenya Oiolossë). One might think that the ending -in added to prepositions corresponded to the independent article in for plural 'the', so that words like erin or uin would be used in conjunction with plural words only. But the King's Letter demonstrates that this is not the case; here we find these words used together with singulars: erin dolothen Ethuil 'on the eighth [day] of Spring', uin Echuir 'of the Stirring' (month-name). Presumably -n, -in suffixed to prepositions represents an oblique form of the article that is used both in the singular and the plural. - In some cases, the normal, independent article is used following an independent preposition, just as in English: cf. naur dan i ngaurhoth *'fire against the werewolf-host' in one of Gandalf's firespells. Dan i 'against the' is not replaced by a single word, sc. some form of dan 'against' with the article suffixed. Perhaps some prepositions just can't receive a suffixed article, or perhaps it is optional whether one wants to say nan or na i(n) for 'to the', erin or or i(n) for 'on/over the', uin or o i(n) for 'of/from the'. We don't know.

How To Speak Sindarin Elvish

The genitival article: Sindarin often expresses genitival relationships by word order alone, like Ennyn Durin 'Doors (of) Durin' and Aran Moria 'Lord (of) Moria' in the Moria Gate inscription. However, if the second word of the construction is a common noun and not a name as in these examples, the genitival article en 'of the' is used if the noun is definite. Cf. names like Haudh-en-Elleth 'Mound of theElf-maid' (Silmarillion ch. 21), Cabed-en-Aras 'Deer's Leap', *'Leap of the Deer' (UT:140), Methed-en-Glad 'End of the Wood' (UT:153) or the phrase orthad en·Êl 'Rising of the Star' in MR:373. Cf. also Frodo and Sam being called Conin en Annûn 'princes of the West' on the Field of Cormallen. (This genitival article sometimes takes the shorter form e; cf. Narn e·Dinúviel 'Tale of theNightingale', MR:373. See below, in the section about consonant mutations, concerning the various incarnations of this article and the environments in which they occur.) Only infrequently does the normal sg. article i replace e(n)- in genitival phrases, but in the King's Letter we have Condir i Drann for 'Mayor of the Shire'. But in the plural, the normal pl. article in is normally used even in a genitival construction, cf. Annon-in-Gelydh 'Gate (of) the Noldor' (UT:18), Aerlinn in Edhil *'Hymn (of) the Elves' (RGEO:70, in Tengwar writing). However, there are examples of the explicitly genitival article en being used in the plural as well: Bar-en-Nibin-Noeg, 'Home of the Petty-dwarves' (UT:100), Haudh-en-Ndengin 'Hill of Slain', or *'of the Slain Ones' (Silmarillion ch. 20). This seems to be less usual, though.

In many cases, the articles cause the initial consonant of the following word to change. These phonological intricacies are described below, in the section about consonant mutations. The article i triggerslenition or soft mutation of the following noun; see below. The final n of the article in is often swallowed up in a process called nasal mutation; the n disappears and the initial consonant of the noun is changed instead. On the other hand, the nasal of the suffix -n or -in, 'the' appended to prepositions, apparently persists - though it seems to trigger what we tentatively call mixed mutation in the following word.

The articles are also used as relative pronouns; cf. Perhael (i sennui Panthael estathar aen) 'Samwise (who ought to be called Panthael)' in the King's Letter, or the name Dor Gyrth i chuinar 'Land of the Dead that Live' (Letters:417 - this represents *Dor Gyrth in cuinar, an example of nasal mutation. Dor Firn i Guinar in the Silmarillion ch. 20 employs singular i as a relative pronoun even though Firnis plural; the reading Dor Gyrth i chuinar from a very late letter (1972) is to be preferred).