It's Weird How Cm2 Affects People.No matter how well you've been doing in the previous version of the game, no matter how fond you are of some of the players you've bought, developed from scratch, or discovered by accident; no matter how proud you are that you've taken someone from the infested gutters of Division 3 up to the heights of Europe; as soon as the new version comes in, you abandon your old game. Instantly. The arrival of the new disk has the same effect as a new football season itself: you're full of fresh hopes, excited about the prospect of new (real-life) buys, and itching to get into it. (That doesn't explain why some people around here immediately rush to buy all the same players they had in the previous version, but that's another matter).

This update comes with a slightly altered version of the game. It's been made harder: harder to score; harder to succeed long-term; harder to work out a winning formation. At times, it's like playing the original, where you.needed to create four chances in order to get a goal, and the computer (believing itself to be some kind of electronic Maradona) seemed to need half that. 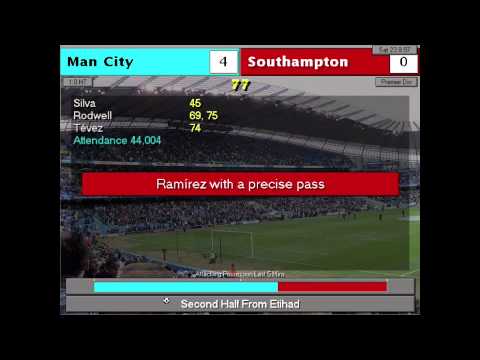 You need to concentrate more on winning the ball back than before, and a different approach to away games may also help. The boards' attitudes to managers are more hard-nosed and there are changes in the way players react in matches - headstrong players retaliate after bad fouls, or remember who it was that 'got them', so they can dish out some extras later in the game, and so on.

Real-life major injuries have, for the first time, been incorporated into the game - along with recuperation times. So Shearer's out until Easter; Chris Armstrong's out until about October (the game starts in July, remember). The day I wrote this, it was announced that Roy Keane would be out for the whole season - a shame, because they were talking about ensuring he would be in the game.

Most of the new features are unlikely to induce a full-on chubby in even the most ardent fans. The big new ideas (virtual dress-me-up manager dolls; light-sourced dancing mascots, or whatever) are being saved for next year's CM3. You'd be hard pressed to even notice some of the changes in this version unless you're a real anal obsessive type. Hang on, that's everyone who plays it. Anyway, 16MB of RAM lets you run multiple leagues at the same time, from all major European leagues (and Scotland), as long as you have the processing power (running three leagues on a P90 really drags: you have all those extra matches, not to mention Under-21internationals). Run an 8MB game if your machine's crap.

Basically, it's an update disk with the odd new feature and tweaked gameplay. There are things that will irritate you and you might quibble with some of the ratings. The main reason for buying it is to have this season's stats. As such, 30 quid may seem excessive, especially as you could download one of the updates from the internet into the old version. But you do get the chance to play in far-flung leagues and you do get a harder challenge. You know you're going to buy it.

For the first time, the magical jiggery-pokery used to create the players, teams and managers in the game is yours for the asking, giving you power hitherto unprecedented in the realms of human experience. With this tool, you're only slightly lower down than God on the All-Powerful Beings ladder. Well, Paul Daniels, then.

You can mess about with stuff in all the databases, editing player ratings and even creating new players from scatch, as I've done here. Cheats and blackguards will, of course, abuse this power. Right-thinking people like us won't go near it. We've only changed a few things here to show you what you can do.

It's a bit disappointing, really — you can only use it before you start a game. Which sort of defeats the object of having it in there, really, because no-one's going to check through every rating before they start. And if, once you start a game, you notice some players have ratings you'd like to change, you'll have to start again. The Collyers claim they never intended it to be used to alter things as the season progresses, which is why they haven't changed it from the one they use into a more friendly version. It's kind of, 'Here you go, we've finished with it, take it or leave it.' Personally, I'll leave it. Meanwhile, if you want to keep players up to date as they move around in real life, you'll have to use the editors on the internet, which apparently still work with the new code.

Download Championship Manager 2 (CM2) safely and for free right here. The game is a soccer management simulation, where you start in the season 1997/1998.

In CM2 you're the coach in of the biggest clubs in Europe. Despite the fact that the game consists purely of statistics and tables and no graphics at all, it's extremely addictive, and you cannot avoid not getting hooked if you're a soccer fanatic.
You can play in the following leagues: English, Italian, Spanish, French, German, Scottish, Dutch, Portuguese, and Belgian.
If you're looking for a easy way to become natinal trainer in the game you can become it by typing in the following players for the individual countries:
Denmark - Bo Johansson
Norway - Egil Olsen
Scotland - Craig Brown
Italy - Cesare Maldini
France - Aimé Jacquet
Spain - Javier Clemente
Nederland - Guus Hiddink
Belgium - Georges Leekens
Germany - Berti Vogts
England - Glenn Hoddle
North-Ireland - Bryan Hamilton
Ireland - Mick Mccarthy
Wales - Bobby Gould

In order to play the game you need to install DOSBox. We also recommend that you run DOSBox via DosBox Frontend Reloaded.

Check out Championship Manager 2: on video:

Critic's assessment as well as advantages and disadvantages