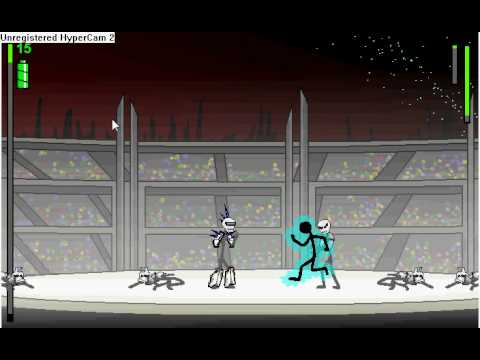 Electric Man 2 is a fighting game geared towards teens, where you are a contestant and your role is to fight to achieve an ultimate goal of becoming The Powerful Stickman Champion. You have to fight different fighters in the tournament until the end where you fight the undefeated champion to take the title. You have to battle against different hosts of opponents on the tournament, where you can combine martial arts, super human powers and street fighting to tackle your opponents. Also you can make use of some great fighting abilities like moving in slow-motion and using special bullet-time moves. However, in order to earn your title of The Powerful Stickman Fighter you have to finally fight and beat the current champion who has never been beaten on the previous fights. Electric Man 2 allows you to pick a stickman, give it a color and a name. Once you pick a difficulty level you can start the game. There is a life meter and battery meter in the top left corner of the screen which reduces every time you get hit. The life meter reduces every time you get hit and the battery meter reduces when you use the slow motion moves but slowly recharges itself. As you play, you should check battery level meters and your life which appears on the left side of the screen. Whenever you get hit by your opponent, the life meter goes down but you can make use of your battery life, which should be full in order to allow you to pull out some special moves to give you more power. You will notice that the battery runs out whenever you choose to use the slow-motion moves and this would make you be unable to make use of them at some point. However, if the battery runs out it can be able to recharge itself. Finally, if you wish to return later to the Tournament you need to keep the Save Code that you receive after every fight which you have participated in. The animation of the Electric Man 2 is good and there are no lags. While you are playing you can enjoy techno music which really works to get the adrenaline going. First, you create the custom stickman that you prefer to use on the tournament. Then choose a name and the color you want for your stickman. Finally, choose the level of difficulty that you prefer.To control the game ElectricMan 2 use keys: “Left arrow – move left”, “Right arrow – move right”, “Down arrow – dodge”, “S” – Kick, “E” – Throw moves/Slow-motion, “A” – Punch moves, “D” – Grab/Throw moves, “Q” – Slow-motion punch moves, “W” – Slow-motion kick moves, “D” – Throw/Grab moves. In conclusion, the game representation and the background music make it interesting and great. This makes the game so enjoyable and addictive to continue playing. Electric Man 2 is a fun game that you will enjoy. You should definitely try it.