Nathan speaks in a very familiar and friendly way with Caleb. And although inviting Caleb to participate in the Turing Test he constructed was utterly based in his own self-interests, I think there is an unspoken appreciation Nathan comes to. Alex Garland spoke to this exact question in an interview with David Onda at Xfinity.com. In short, the two machines; Ava and Kyoko converse in machine language in a way in which we mere humans couldn't possibly understand. The gist is that they collude to kill Nathan.

Every day, Caleb has a session with Ava because he’s supposed to say if she is a failure or not as an AI according to the Turing test. During session two, while Ava and Caleb are having a normal conversation, there’s a power cut. Ava takes the opportunity to tell Caleb he’s wrong and he shouldn’t trust Nathan.

During this power cut, Ava creates a moment of tension and keeps a certain mystery. Indeed, she doesn’t explain why Caleb shouldn’t trust Nathan, this way he’ll be wondering why she said that and be more suspicious about his host. He’ll also believe she trusts him and become closer to her. It's actually the first action Ava makes to manipulate Caleb. 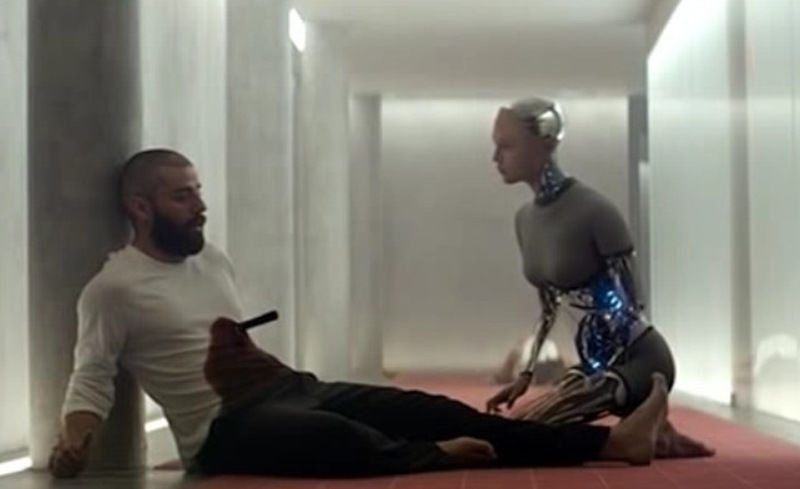 During another session, Ava flirts with Caleb. She says they should go on a date together when she gets out. She then asks Caleb to close his eyes to show him something special. When he opens them she’s putting on some clothes and a wig. After that, she tells him it’s what she would wear on their first date.

When she does that, Ava shows vulnerability. Caleb then starts to have feelings for her and even though he’s not sure if she’s faking or not, she looks so innocent that he stops considering the second option. His emotions are slowly starting to take over his reasoning. Then again, Ava manages to manipulate him. For Nathan, she isn’t showing proof of human consciousness, but the intelligence to analyse human behavior to acheive her goals.

After a few power cuts, Caleb tells Ava he thinks Nathan is responsible of them because he wants to see what they will say when they think he’s not watching. Ava then explains to him she creates them when she’s charging her battery.

When Caleb learns that, he doesn’t only see how Ava is able to take her own decisions, but how she trusts him and fear Nathan. Of course, Ava manages to create intimate moments between them to control Caleb, because she knows he is her only chance to get out and she'll do anything to acheive that. However, since the power cuts happen during almost every session, Nathan understands they are created by Ava. He then decides to put a camera in the room that will still record when the power is out.

At one point, Ava starts to ask different questions to Caleb. She starts with easy questions like what’s his favorite color, but finish with a really hard one. She asks what will happen to her if she fails the test. Caleb doesn’t really know what to answer, but says it’s not up to him, but to Nathan. Ava replies wondering why somebody has the right to decide if she deserve to live or not, it’s not normal.

Ava is now playing the victim and it works. Caleb asks Nathan what will arrive to Ava. Nathan explains that he’ll switch her off and create a new AI based on her. Since Caleb sees her has somebody with real thoughts and emotions, he can’t stand the fact that she’ll be switch off, so he decides to create a plan so she can escape. Here we can really see that Ava's plan worked. Caleb officialy decided to be on Ava's side and now sees Nathan as the enemy.

Caleb’s plan worked. He managed to change the security settings, this way when Ava created a power cut, she was able to escape. When she did, she convinced Kyoko to stab Nathan and killed him. She then put on some clothes and skin to look human and locked Caleb in Nathan’s room. When she left, she looked at Caleb for a second without even a hint of regret on her face.

When Ava kills Nathan with the help of Kyoko, he can’t believe that he created something that led to his death. He's freaked out and probably scared for what will happen next, because he knows she's dangerous and not program to live in the real society, she's not a complete success. On the other side, Caleb feels betrayed and stupid. He let his emotions take over and now he understands how stupid he was. He’s desperate because Ava locked him in Nathan’s office like he was nothing. Forthermore, since Caleb had feelings for Ava, it probably really hard to understands he meant nothing to her.

Made with Adobe SlateToby: the secret mine download for mac.

Make your words and images move.