1933 – changed to the International Aircraft Corporation

1935 – Howard Anthony purchased the company and changed the name back to the Heath Aircraft Company.

1954 – Anthony killed in an airplane crash

1962 Daystrom was purchased by Schlumberger Limited.

1982 – Heath Company launched thier last amateur radio, the SS-9000, which was so complicated to build it came factory assembled.

1991 – The Heath Company, except Zenith Data Systems, left the Hilltop Road plant and moved to a former K-mart building at Riverview Drive in Benton Harbor. 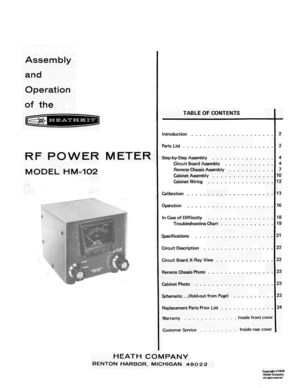 1992 – The end of Heathkit, as the kit producer we remember it to be, was definite. The kit lines was discontinued and all product lines that was left was the Lighting, Security and Educational Systems

2008 – The Heathkit Company moved to Hawthorne Avenue in St. Joseph. Data Professionals in Pleasanton, California, bought all Heathkit manuals and the rights to sell and distribute them

2011 – The Heathkit Company announces that they are back in the kit-business. They first launch the GPA-100 (Garage Parking Assistant).

2012 – Heathkit Educational Systems bankruptsy, is sold out and the Heathkit story seems to end.

2015 – Data Professionals was acquired by the Heath Company