I'm a freelance writer living in Perth, Western Australia.
A stunning film for the whole family to enjoy
This beautifully animated retelling of Swan Lake, from 1994, tells the tale of everlasting love between Princess Odette, voiced by Adrian Zahiri (Grace Under Fire & The Swan Princess: Singalong), during her childhood years, the late, great Michelle Nicastro (When Harry Met Sally & Rugrats), during her adult years and Liz Callaway (1997's Anastasia & Disney's Beauty and the Beast 1991), as her adult singing voice and Prince Derek, voiced by Adam Wylie (Superman/Doomsday & Picket Fences), during his childhood years and Howard McGillin (One Life to Live & Disney's The Hunchback of Notre Dame), during his adult years.

When Princess Odette is born, her father King William, voiced by Dakin Matthews (True Grit & 2012's Lincoln) and Queen Uberta of an opposing kingdom, voiced by Sandy Duncan (Valerie & Disney's The Fox and the Hound), hatch a plan to bring their children together each summer, in the hopes that they would fall in love and join their two kingdoms forever in marriage.

However, the kids don't get along at all, leading to a musical montage of hilarious hi-jinks throughout the years. As they grow into mature young adults, it seems like they might finally get the happily ever after everyone has been waiting so long for. But when Prince Derek asks Princess Odette to marry him, she asks him if her beauty is all that matters to him, Derek replies 'What else is there?'.. Any woman could tell you that this was definitely the wrong answer and despite their clear attraction to each other, Odette makes the decision to call off the engagement. This is very different to the standard princess story and teaches the viewers the important lesson to get to know someone well enough before jumping into a marriage and not to judge people on their personality and intelligence, as opposed to just their looks.
Once their short-lived engagement is off, Odette regretfully leaves for home, but on the way, she is kidnapped and put under a cruel spell by the evil Lord Rothbart, voiced by the late, great Jack Palance (1989's Batman & Tango & Cash), who puts a curse upon Odette, transforming her into a beautiful swan, who can only become human again for very short periods of time, such as when the moon shines on the lake she is being held captive in. During this time, Lord Rothbart proposes marriage to Odette, in an attempt to make her succumb to Stockholm Syndrome, however, she doesn't give into his pressures and proclaims that she loves Derek and will someday be free.

Odette soon befriends a down to Earth turtle named Speed, voiced by Steven Wright (Natural Born Killers & Reservoir Dogs), a pompous frog, named Jean-Bob, voiced by John Cleese (Monty Python & 2018's Charming) who thinks far too much of himself and an injured bird, which she nurses back to health, named Puffin, voiced by Steve Vinovich (The Santa Clause & Alpha & Omega) and together they come up with a cunning plan to help Odette rescue herself and defeat her enemies. Meanwhile, Prince Derek and his best friend Bromley, voiced by Joel McKinnon Miller (The Truman Show & Super 8) are devising a plan of their own to discover what happened to the beloved princess.

This film features a strong set of catchy musical numbers, which you and your kids will be singing along to for years to come, coupled with exquisite animation, which includes an amazing series of transformation scenes and a strong storyline, dotted with strong feminist values.

'The Jimmy Jab Games' is the third episode of the second season of the American television policesitcom series Brooklyn Nine-Nine. It is the 25th overall episode of the series and is written by Lakshmi Sundaram and directed by Rebecca Asher. It aired on Fox in the United States on October 12, 2014.

The show revolves around the fictitious 99th precinct of the New York Police Department in Brooklyn and the officers and detectives that work in the precinct. Jake Peralta (Andy Samberg) is an immature yet very talented detective in the precinct with an astounding record of crimes solved, putting him in a competition with fellow detective Amy Santiago (Melissa Fumero). The precinct's status changes when the Captain is retiring and a new commanding officer, Cpt. Raymond Holt (Andre Braugher) is appointed as the newest Captain. This creates a conflict between Jake and Holt over their respective methods in the field. In the episode, with Holt and Terry off due to a meeting in a plaza, the gang decides to assemble their annual 'Jimmy Jab Games' with Jake wanting the number of Rosa's friend if he wins. Meanwhile, Boyle and Gina discover that Hitchcock has a tape that reveals their relationship and set to take it from him.

The episode was seen by an estimated 4.51 million household viewers and gained a 2.2/6 ratings share among adults aged 18–49, according to Nielsen Media Research. The episode received mostly positive reviews from critics, who praised the episode's similitude to Office Olympics from The Office and Andy Samberg's performance.

Holt and Terry (Terry Crews) are assigned to a meeting at 1 Police Plaza, leaving the precinct without them for a few hours before they are to defend the President of Serbia's motorcade. The gang then decides to do the 'Jimmy Jab Games'. The competition's name comes from Jake's mispronunciation of Mahmoud Ahmadinejad, who Jake also believed was the 'King of Iraq' rather than President of Iran. Jake makes a bet with Rosa (Stephanie Beatriz): if Jake wins, he gets Rosa's friend's phone number (which she had earlier refused to give to him); if he loses, he will pay $200 to Rosa and never ask for any more phone numbers.

In the first game the participants must eat expired Chinese food. Boyle is the first one eliminated, and Scully (Joel McKinnon Miller), the winner, leaves due to food poisoning. The second game, a foot race in anti-bomb suits, ends with Hitchcock (Dirk Blocker) eliminated. The next task involves Jake, Rosa and Amy going undercover before anyone recognizes them. Amy seems to have lost, but Rosa fails to convince a single person, eliminating herself. However, Rosa offers Jake to cancel the bet as it's clear he's in love with Amy. Jake rebuffs this. The final task involves them running through the precinct to complete various activities. Jake gets stuck in the final activity, giving Amy the victory. Her victory is interrupted by Holt's and Terry's return, and Holt orders them to stop. Jake later reveals to Rosa that he purposely let Amy win, to which she decides to give him her friend's number in order to help him move on from Amy.

While away from the office, Holt faces his nemesis Deputy Chief Wuntch (Kyra Sedgwick) to get $1200 for new kits to help combat a new, more potent form of ecstasy. Wuntch tricks Holt into asking for and accepting a high budget for a drug task force that will end up at a loss if the operation goes awry. Meanwhile, Gina (Chelsea Peretti) orders Boyle to snare a tape that reveals their relationship from an oblivious but ultimately vindictive Hitchcock. After fighting with him, Boyle gets the tape and destroys it. 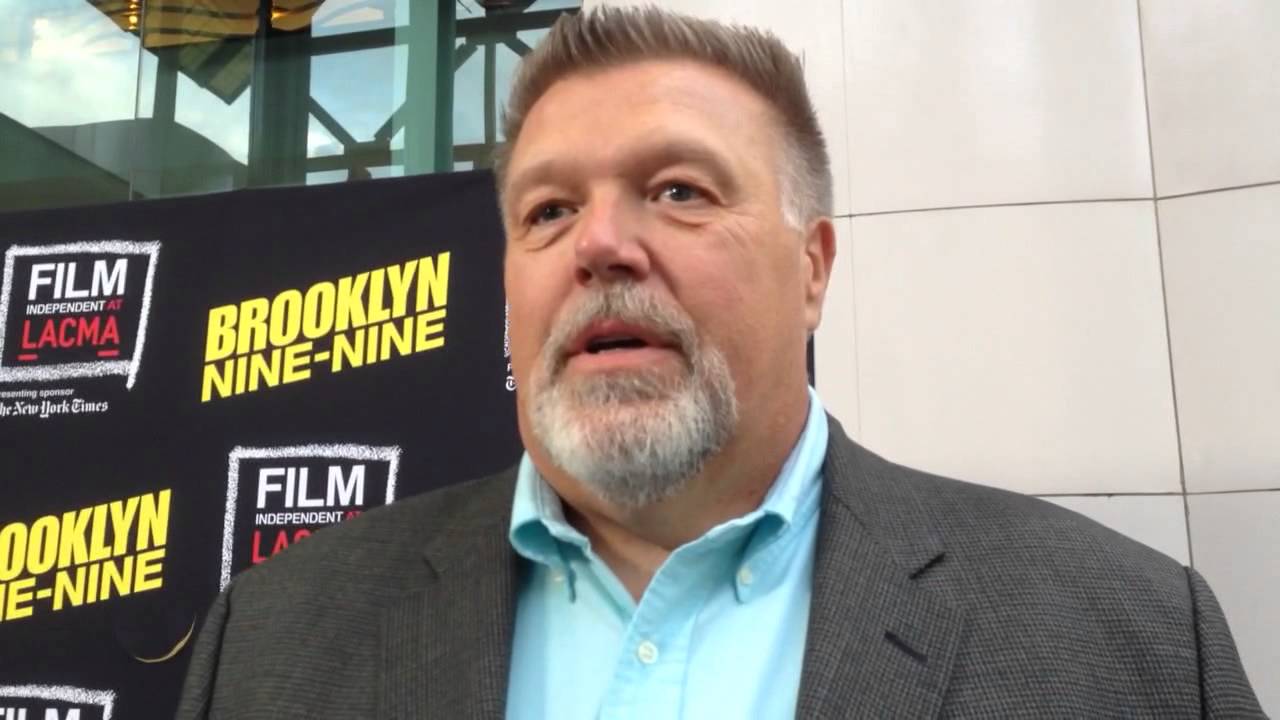 In its original American broadcast, 'The Jimmy Jab Games' was seen by an estimated 4.51 million household viewers and gained a 2.2/6 ratings share among adults aged 18–49, according to Nielsen Media Research.[1] This was a 36% increase in viewership from the previous episode, which was watched by 3.31 million viewers with a 1.6/4 in the 18-49 demographics.[2] This means that 2.2 percent of all households with televisions watched the episode, while 6 percent of all households watching television at that time watched it. With these ratings, Brooklyn Nine-Nine was the third most watched show on FOX for the night, beating Mulaney and Family Guy but behind The Simpsons, fifth on its timeslot and fifth for the night, behind Once Upon a Time, The Simpsons, The OT, and NBC Sunday Night Football.

'The Jimmy Jab Games' received mostly positive reviews from critics. LaToya Ferguson of The A.V. Club gave the episode an 'A-' grade and wrote, 'The Jimmy Jab Games' isn't a revolutionary episode of television. But it is consistently funny, and sometimes it's important to remember that 'funny' is the true end goal of sitcoms. (It has something to do with what the 'com' in sitcom means, I think.) Even with the Peralta/Amy situation in full effect, it never actually slows down the episode as much as it draws attention to the show's possible flaw. It does allow for more Peralta/Diaz interaction, which has always been welcome, especially in a post 'Pontiac Bandit' world.'[3]

Jackson McHenry of Entertainment Weekly wrote, 'The Jimmy Jab Games' manages to grow out of The Office's shadow by letting its characters be self-aware in a way that the employee’s of Dunder-Mifflin never were. Jim and Pam were both afraid to tell anyone about their feelings, but Jake and Amy discuss theirs openly, with their friends and each other. By the end of this episode, Jake knows what he wants, but he also knows what is the more grown-up thing to do. Brooklyn Nine-Nine's less about realizing what's right there in front of you, and more about learning that no matter how much you want them, some things are out of your control.'[4] Allie Pape from Vulture gave the show a 3 star rating out of 5 and wrote, 'Some of my favorite B99 episodes so far have been the ones without any crimes involved ('The Party,' 'Tactical Village'), just letting the cast play with each other. This is how you get Peralta lighting a bagel on fire as Scully, attired in a Viking hat and carrying a hockey stick, sings opera. Every episode of this show could consist of new Jimmy Jab events, and I probably wouldn’t get bored.'[5]

Alan Sepinwall of HitFix wrote, 'Jimmy Jab Games' is a pretty straight lift of the plot of 'Office Olympics' from The Office season 2, but I’m okay with that for a few reason. First, Mike Schur wrote 'Office Olympics,' so if he wants his writers here to import the nine-year-old idea into the Brooklyn Nine-Nine universe, more power to him. Second, this episode expanded on the idea by incorporating more of what we know about the ensemble and their gifts (like Scully's opera singing) and by acknowledging all the weird toys a bored detective squad would have to play with.'[6] Andy Crump of Paste gave the episode a 7.1 and wrote, 'Fortunately, 'The Jimmy Jab Games' finds plenty of opportunity to make up for its cathartic lapses with hijinks. It is amazing that anybody manages to get anything done in the 99th, but that's nothing new to us; slightly less familiar is the notion of stakes, at least not the sort of stakes that require the prank wars, and this general lackadaisical approach to work might need to come to an end. Brooklyn Nine-Nine isn't a dramatic cop show, of course, so it's allowed a bit of leeway as far as it concerns reality, but we're back on track with the through line about Holt's attempts to whip his crew, and his legacy, into shape. Too bad that won't involve Sedgwick from here on out, but it’s heartening to see the show commit to its arc all around.'[7]