The day of reckoning has finally come. Today, you are about to witness the transition of my superb 3D galleries from Google SketchUp models with somewhat not so realistic skins and colors into perfect models in Kerkythea, rendering with stunning real-life precision and quality.

In this article, I'm going to show you how you can use Kerkythea to import models created in Google SketchUp and then render them into marvelous, breathtaking pieces of art. I will also showcase some of my models with fresh new skins and lighting effects. In fact, I've redone the entire section with extra images, so please make sure to spend a few hours gazing at works of beauty. Now, let us commence to enjoy.

To export your models from Google SketchUp to Kerkythea, you will need SketchUp Importer. Optionally, you can also download lighting fixtures, which are also worth exploring.

The Importer is a ruby script, which you need to copy into the Plugins directory of your SketchUp installation. Once you launch the program, there's going to be a new toolbar available, allowing you to export your models, materials or lighting to Kerkythea.

For example, my upcoming spaceship model:

Then, you simply export the model:

And open it in Kerkythea:

The imported models are basically huge XML files. My SketchUp modes, which are normally 4-5MB bloomed to about 50MB in size. You can easily gobble a lot of disk space, especially if you have several versions, with different shadows, lighting or textures.

Pay attention to the left column, which lists your materials. This is really neat. And we'll see how we can edit those soon and make our models look even better than normally, although, if you've chosen your textures wisely, you won't need much editing in Kerkythea.

Kerkythea is a very reasonable program. Its default rendering options are light and quick. A fairly modern machine will produce good-looking renders in just a few short minutes. You should always start with the defaults until you're satisfied with the result, before trying more complex rendering options.

Kerkythea can use one or more cores. For instance, here's a lightweight rendering:

And here's one kicking in with all four cores on my HP machine revving to max:

Memory wise, Kerkythea is not that ravenous, although it can eat 1-2GB of RAM easily. However, the single most important piece is the CPU power, which you should have in plenty. P.S. Kerkythea works on Linux, too, so you should check that, as well.

And here's a sample product, nothing grand yet, just work in progress:

Nothing spectacular so far. We need to work on the background, the skin materials and more. Plus, more detailed rendering options will yield even better results. BTW, while you're waiting for your model to complete, you can get the first impression by taking a look at the Quick View window in the right corner or even open the Image window, which updates more or less in real time.

Renders can take as little as one minute and they can also stretch for a long time. For instance, with some of the more aggressive settings, your rendering time can easily turn into weeks of work. See my sample below; 3/10000 pass running, with 7 minutes time elapsed. If you do the calculation, we're talking four cores revving at 100% for 20,000 minutes, or roughly three weeks! That's a lot. You need a dedicated machine for that, you don't want to melt your laptops doing some fine 3D art.

I can't possibly showcase all of the models here, but hop into the individual galleries and you'll see a plenty more. Each model and its own special settings. Plus, I'm going to write followup articles, as my renders improve and my GIMP-ing skills grow. You will enjoy progress even as I enjoy enlightenment.

Some third-party images were used for model backgrounds. I would like to thank the original creators for their beautiful and inspiring work, which made it into my models.

Yes, you will need to be careful what materials you choose. Some will end up looking plastic-like, others will infuse your model with a real-life texture. For instance, early work prototypes of some of galleries.

And this is only a teaser! Go into the each gallery and enjoy yourselves! Like I've mentioned earlier, the galleries will constantly be updated, as I discover new render techniques, better materials, better lighting and background, as well as allow my CPUs the time to create these lovely works.

Kerkythea is a bliss. There's nothing more I could ask for. Well, there is, but metaphysically speaking, for art geeks, this is the best of the best. Converting your models from Google SketchUp, where they already looked fairly decent, and see them breathe a new life. It's amazing.

My promises sometimes take a while to come true, but there you go. I hinted at having my models reborn in Kerkythea, and this is what I did. Now, this is only a beginning. We have other programs to explore. Don't forget POV-Ray or anim8or. And I have a few more goodies hidden up my sleeve. And yet more models and whatnot. I will even try to render my wife's interior design work into real-life stuff.

Welcome to the revolution.

In SketchUp saved camera info (which includes more than just station point and focal point) is called a 'scene'. If your model has scenes defined, you will see a series of clickable buttons across the top of the model window, as shown below left. Click them to restore the saved view conditions.

You can also use the 'Scenes' window to view, add, delete and reorder scenes. Open that window with 'Window > Scenes'.

You can create scenes by clicking on the circled-plus-sign in the upper left of the Scenes window, by using 'View > Animation > Add scene' or it's keyboard equivalent.

You play an animation using 'View > Animation > Play'. The animation is created according to settings in the Model Info dialog shown at left and accessed via 'Window > Model Info'. If Enable scene transitions is checked, in-between frames are created by interpolating between scenes. The number of frames in the interpolation is controlled by the Transition: time value. At the end of each scene-to-scene transition, the camera dwells on a scene for the amount of time specified in the Slide delay:time.

Once you've defined your animation, you can render it with SketchUp itself by selecting 'File > Export > Animation ..'. In the export dialog you'll be able to select the format (.mov will get you a QuickTime movie), and (using the 'Expert' settings within the 'Options' dialog) the codec, the frame size, the frame rate, etc. Of course, you can't employ any rendering features that SketchUp doesn't usually provide (fancy textures, multiple lights, etc.) For those, you need Kerkythea.

SketchUp lets you animate the camera, the sun, and (in theory) the 'face me' components. That's it. No geometrical changes during the animation (moving or growing geometry, moving cars, etc). No texture changes (no live TV screens). Those are limitations, but when you're doing an animation about a building, most of it doesn't need to move.

A Helpful Tutorial on Kerkythea Animations

Notes on the Tutorial 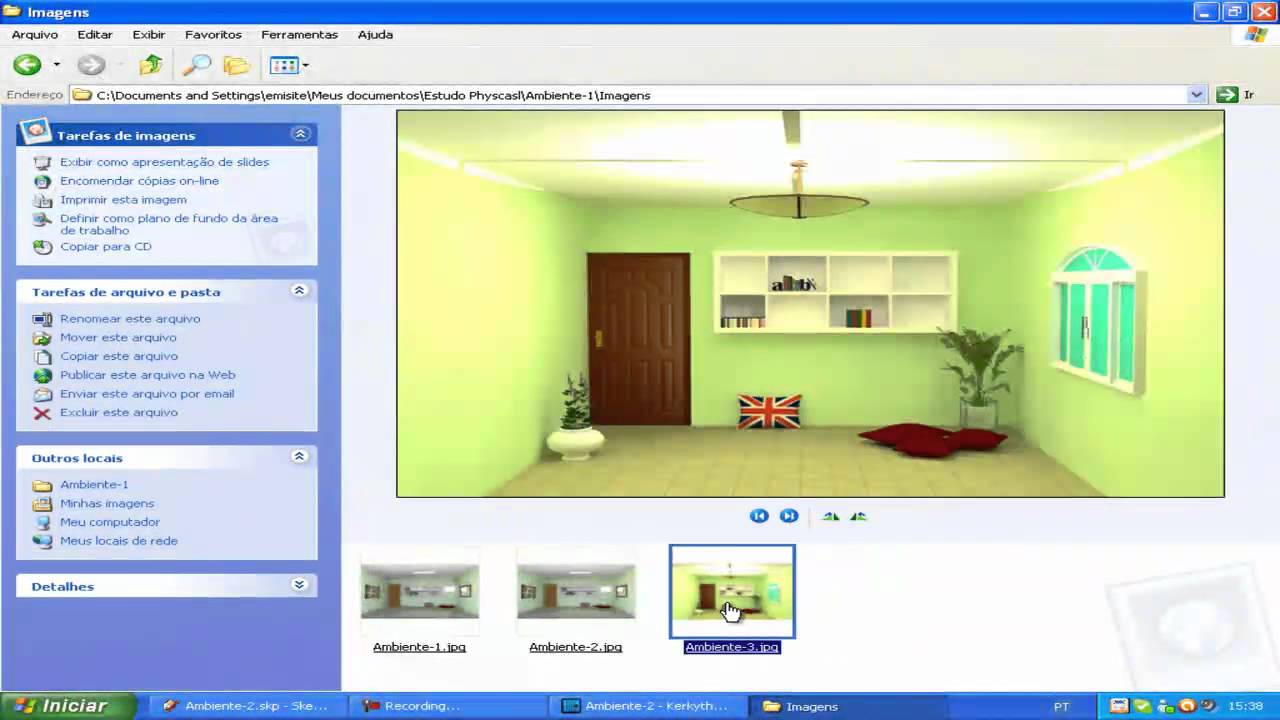 Watch Khichdi Online | Full Series: Every Season & Episode. IF you have multiple computers available with Kerkythea on them, you can place a duplicate of your (animation) folder on each, edit the (model).kst text file to divide the work between computers, run the animation scripts on each, and then merge the folders of finished frames back together to make the final animation. If that sounds like something you might want to do, read on ..

Each of your rendering machines will need the same setup, including any special textures, etc. Each will need a copy of the (animation) folder, but each will need an edited copy of the animation script, which is in the (model).kst file. The (model).kst file itself is pretty simple. It looks something like this. The 'messages' are script commands that Kerkythea executes and the general pattern is 'merge a frame-definition (xml) file, render the frame, save the frame'. If you keep the first few lines intact, you can delete groups of merge/render/save commands to avoid rendering those frames.

So, if you have two machines, you need two versions of the (model).kst file, one for each machine. If you're doing 200 frames in total, you could edit the first file to do frames 0 through 100, and modify the second file to do frame 0 plus frames 101 through 200. Put one script on machine 'A' and one on machine 'B' and follow the instructions above for running the script on each.

CAUTION!
If you are rendering in such a way that you are re-using light-cache or photon-map data from frame to frame, you may need to pre-render and save a complete photon-map prior to splitting the kst script file into parts.

How To Use Kerkythea Sketchup Plugin