There are two ways to import DICOM images in OsiriX:

You can then view and edit the DICOM headers.

Importing DICOM Images into OsiriX via a Network[edit]

Images can either be pushed from the PACS using a DICOM 'store' function, or they can be 'pulled' by the DICOM query-retrieve function of OsiriX.

If you are working in a PACS environment, the easiest way to import DICOM images into OsiriX is to configure OsiriX as a “DICOM Listener”. In this configuration, DICOM images are sent from a PACS workstation to a Mac computer running OsiriX, which passively receives the images.

OsiriX and the PACS workstation must be first configured: Assign an AETitle and a Port number to OsiriX in the “Preferences” window. Then, contact your “friendly” PACS manager to configure the PACS. Don't forget to leave OsiriX running -- the DICOM Listener works only if OsiriX is active!

If your OsiriX workstation is configured for multiple OsiriX users who log in via the fast user switch, then each user must have a separate AE title and port number.

As of version 1.7.1 OsiriX cannot be queried by another workstation.

OsiriX can query other DICOM devices such as workstations, CTs, MRIs, etc. Queries can be performed even if the other device is not configured to send to OsiriX. To query, first go to the preferences and under Locations add the AE Title, port, and hostname ( IP address) of the remote location. Go to the query window. Select the location and verify the connection if you want to. Type the name or part of a name in the search field and hit the return key. The query field has a pull down menu with more options.However, if you want to retrieve studies, the remote devices needs to be set up to send to OsiriX. The AE Title, port, and hostname (IP address) of OsiriX need to entered into the remote device of PACS.

If you have DICOM files on your hard drive, or have a DICOM CD-Rom, you simply need to click on the “Import” button of the “Local database” window. You then select either files or folders containing files. Multiple files and/or folders can be selected by clicking while holding the ‘shift’ key. You can also “drag-and-drop” files directly from the desktop into the “Local Database” window.

Some CDs apparently have a strange corruption that prevents Macs from viewing the files, so there is no direct way to access the images from OsiriX. However, the OsiriX Discussion Group has come up with several workarounds for reading poorly formatted image CD's:

There also seems to be an issue when using a VPN connection to retrieve images.

Viewing and Saving the DICOM Header of DICOM Images[edit]

In the main OsiriX window, select the patient/study you want, then open the images by clicking on '2D-3D viewer', once the study has opened, you have the ability to modify the tool bar of the viewer window in OsiriX.One of the tools you can add is the Meta-Data button.

To add this button to your viewer:Under the OsiriX Format Menu, select Customize Toolbar..There will be a whole new set of icons;drag the Meta-Data button (in the top right corner) into your toolbar where you want it.

There you go!You can save the Metadata as a text file or XML.

Since 2010, a commercial version of OsiriX, named 'OsiriX MD', is available.[1] Its original source code is still available on Github.[2] A demo version, 'OsiriX Lite', still remains available free of charge with some limitations.[3] 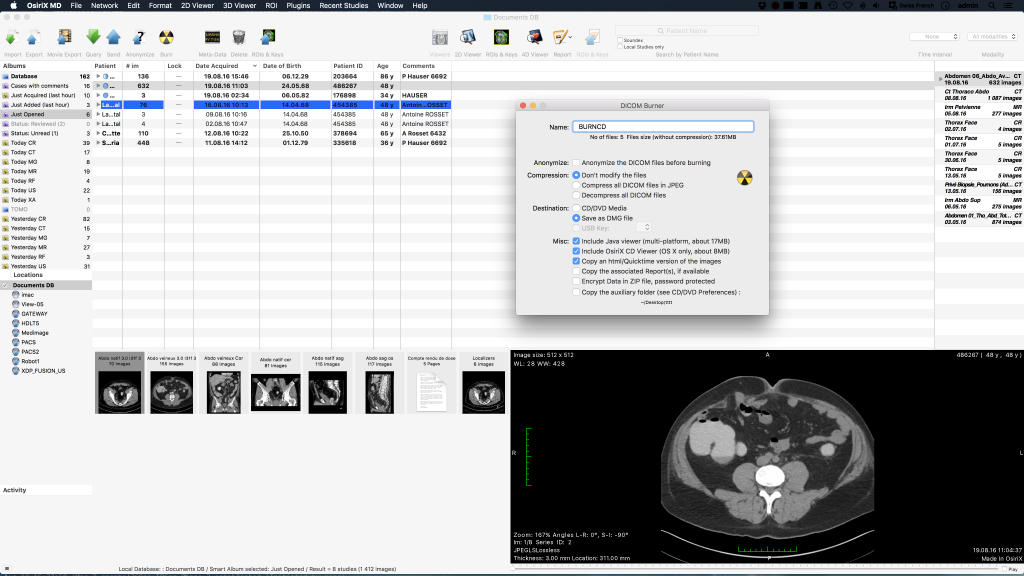 The OsiriX project started in 2004 at UCLA with Dr Antoine Rosset and Prof. Osman Ratib.[4][5] OsiriX has been developed by Rosset, working in LaTour Hospital (Geneva, Switzerland) and Joris Heuberger, a computer scientist from Geneva.

Matlab example programrubackup function. In 2010, a version of OsiriX for iPhone and iPod touch was released.

OsiriX supports a complete plug-in architecture that allows one to expand the capabilities of OsiriX for personal needs. OsiriX is released under a proprietary license and runs under macOS.

OsiriX source code makes heavy use of Apple idioms such as Cocoa. The source is almost entirely in Objective-C.

In 2010, the OsiriX Team created the company Pixmeo[6] to promote and distribute a special limited version of OsiriX called OsiriX MD. Unlike the regular version, this version is certified for medical imaging. OsiriX MD is a FDA cleared 510k class II medical device, according to US Food And Drug Regulation CFR21 part 820. OsiriX MD complies with European Directive 93/42/EEC concerning medical devices. Under this directive, it is regarded as a class IIa.