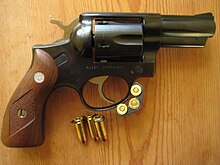 Sturm, Ruger & Co. hasalways been a bit of a dichotomy of a gun company. They use the most modern ofmanufacturing methods, that of precision investment casting, much as would ajeweler or dental lab, to provide a near-final-sized raw part which thusrequires a minimum of machining to become a completed arm. While doing sohowever, they have embraced neo-classic aesthetics in their arms; examplesinclude the their Blackhawk single-action revolvers, the M77 bolt action andNo. 1 fallling block sporting rifles and the Gold Label side-by-side shotguns. 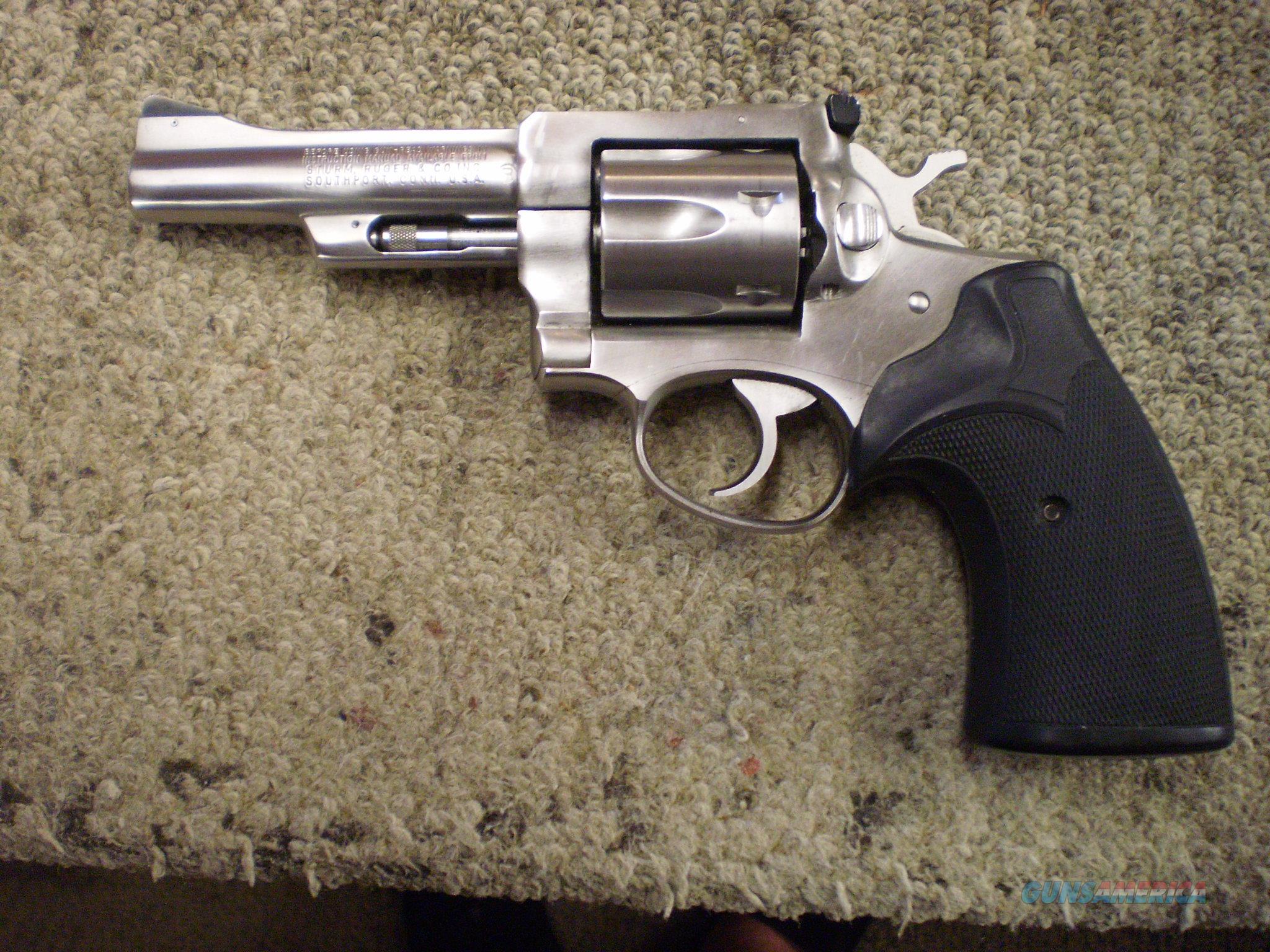 In the early 1970s, whenthe double-action revolver was still the preference of most US law enforcementagencies, Ruger did not have a weapon to compete for this market, nor forcivilian home protection users. They rectified this in 1972 with theintroduction of the Security Six and Speed Six revolvers, building both of regularblued, carbon steel as well as their proprietary Terhune stainless steel.Security Sixes were generally .357s and had adjustable rear sights, while SpeedSixes were fixed sight guns that were made primarily in .357, but also in .38S&W Special and 9mm Luger.

Both were so-called“medium-frame” revolvers, in much the same vein as a Smith & WessonK-frame, or the Colt D-frame, exemplified by the Diamondback. However, theRuger engineers took a good look at the competition’s designs and followedanother path to ensure the new gun’s durability.

First, the engineers bulkedup key frame dimensions, including the height of the frame, the thickness ofthe top strap and barrel shank support and the cylinder diameter. They also offsetthe locking bolt notches on the cylinder to provide added strength to thatmost-thin area of each chamber.

They comprehensively lookedat the sometimes fragile and hand fitted lockwork of these designs, and inusual Ruger fashion, over-engineered all the working parts. If one were to do acomparison detail strip of a Smith, Colt and the Ruger, one would see that piecessuch as the cylinder locking bolt, the hand, the size of the double andsingle-action sears on the hammer, one would see that the Ruger pieces arequite a bit larger.

In addition, the Rugerfolks incorporated a transfer bar firing system. While both S&W and Colt usedrebounding hammers to provide a drop safety scheme and S&W had added thesliding hammer block in 1943 to WWII production “Victory Models” andsubsequently carried this change into civilian production post-war, Ruger feltthat the use of a rising 'transfer bar' of steel interposed betweenthe flat-faced hammer and the frame-mounted firing pin was even safer. Onlywhen the trigger was fully-depressed in a firing stroke would the transfer barrise and allow hammer to strike it and “transfer” that impact to the rear ofthe firing pin, discharging the chambered round.

Ruger arms are also made ofvery good, fully heat treated steels. This means long component life. The frameitself dispensed with the usual side-plate design and the piece is easily“field-stripped” for detail cleaning of the lockwork.

The downside to thisshooter is that the double-action stroke is problematic. Colt’s hand fittingand S&W’s selective-assembly methods meant that revolvers were fitted to thedimensional accuracy of the trigger and hammer pin locations on the frame.While this added to the cost of production, it means that the finished armgenerally needs no trigger action job to make the stroke smooth from front toback.

The Ruger has notableglitches in its DA pull. While I admire the way their engineers over-built therevolver’s internals, and knowing that they were attempting to bulldoze theirway into the marketplace via cost competitiveness by eliminating hand work, inmy opinion the Security Six is a “single-action revolver capable ofdouble-action firing.” Generally, the single-action pull is nothing to writehome about either, usually at least four pounds with some creep, compared tothe 2-3 pound triggers standard on period Colts or Smiths.

However, most shooters werewilling to accept this for the strength and price paid. At its introduction,the Colt Trooper was sold for $161, while the Smith M19 went for $143 and theRuger retailed for $121.

Thirty years on and a good usedSecurity Six can be had in the lower $300 price range. I’ve fitted mine withthe “Reduced” weight spring package from Wolff Springs, yet the DA pull must stillbe at least 14 pounds, with the aforementioned glitches. A prior owner hadtaken the factory walnut “target” stocks and cut finger-grooves into theirfront and reduced their overall girth, making them suitable for smaller hands,but very slippery with the not-inconsiderable recoil of a full-house .357round. I will probably have to fit other stocks affording me a more secure grip,as it squirms beyond my ability to hold it consistently.

Ruger chambers are usuallya bit oversized, easing extraction when dirty, if compromising case lifesomewhat. They are also usually razor-edged at the rear of the cylinder,requiring a light chamfer to ease the use of speedloaders.

However, and this is thereal reason why these guns are a solid buy, they will simply out last any otherDA revolver over thousands of Magnum rounds. (With the exception, of course, ofRuger’s follow-on piece, the GP-100.) If one bought a Security Six, one couldexpect a lifetime of full use and still be able to hand it to one’s childrenwith nary a problem. I once knew of an indoor range that had one as a rentalgun and it digested, by their estimate, some 1,400,000 rounds with no partsbreakages and minimal maintenance. That is the essence of a good deal! Edwin louis cole pdf file.

NOTE: This review is mirrored on the Product Reviews page.

From about the mid-1960s through the 1970s, the mid-frame .357 Magnum, double-action revolver was the most popular service firearm riding on a law enforcement officer’s hip. The .357 Mag’s stopping power was legendary, as well as being pretty legitimate, and the medium-frame size didn’t break down an officer’s arches. Smith & Wesson’sModel 19 pretty much ruled the roost, though the Colt Trooper had its adherents too. Those who could, of course, slipped a Colt Python into their Sam Brownes, though the snake was technically not a medium frame.

Bill Ruger, who already had successfully gone against the grain with his autoloading .22 LR Standard Model, Single-Six and Blackhawk single-action revolvers, as well as his Nos. 1 and 3 single-shot rifles, figured he could muscle his way into part of the law enforcement and personal protection markets, too. Along with Harry Sefried and Henry Into, Ruger began working on the medium-frame double-action revolver project in 1966. Among Ruger’s many talents were to design strength into smaller and smaller platforms and develop built-in modular sub-assemblies. What evolved from these fertile minds became known as the Security-Six, announced in 1970 and began shipping in 1972, and it was another great success story for Ruger.

Ruger’s penchant for building a strong double-action revolver centered on two things: a solid frame, sans a sideplate and using investment castings of modern steel alloys that could be heat treated to maximum strength after most of the machining work was completed. To wit this meant that the new double-action would have a slightly larger cylinder widow compared to the S&W Model 19 to accommodate a slightly larger diameter cylinder. The topstrap of the Security-Six was thickened a bit, as was the barrel shank, to better stand up to a steady diet of magnum loads. Keeping strength—consequently shooter safety—paramount, the engineering team found a way to offset the locking bolt notches, leaving more metal to support the weakest part of the firearm. Too, the locking bolt and hand were more robust. These small parts take quite a beating when the revolver—any revolver—is fired rapidly.

The grip portion of the frame bears a resemblance to the High Standard Sentinel, which, coincidentally, was also designed by Seifried. As with all Ruger firearms, the mainspring on the Security-Six is a coil spring, instead of the then-common leaf spring. Coil springs are used throughout virtually all of Ruger’s guns, save the follower in its bolt-action magazine rifles. Coil springs are less expensive to make in quantity and more consistent in their quality than leaf springs.

In order to control the Security Six with .357 Mag. loads there needs to be more weight than is found by beefing up the frame and cylinder slightly. Therefore Ruger hung a bull barrel with an underlug to protect the extractor on the frame. The barrel features a full-length rib and a ramp with a 1/8″ Baughman-style front sight pinned to the ramp. At the rear is an adjustable sight.

When the Security-Six was being developed, much ado had been made about making revolvers safe to carry with all of its chambers loaded. Ruger in particular was in civil lawyers’ sights because of some idiots carrying their single-action Blackhawks fully loaded and the hammer down on the firing pin, even if for more than a century people had been carrying their single actions with the hammer down on an empty chamber. Some of these boneheads managed to perforate their legs. The sharks—excuse me, civil lawyers—smelled money in the water. The money was Ruger’s, and he engineered a way to protect it with a transfer bar system that prevented the hammer from touching the firing pin except when the trigger is pulled completely to the rear.

Another safety feature was an interlock that prevented the hammer from being cocked when the cylinder is opened. Conversely, the cylinder cannot be opened while the hammer is cocked. So while some of the sharks were successful in drawing small amounts of blood from Ruger, this transfer bar system stemmed the flow of blood, and the company was able to continue prospering.

Finish on the carbon steel Security-Six was black oxide over a nice but not elaborate polish. In 1975 when the stainless Security-Six came to life, the appearance was a subdued brushed stainless steel. Hammers and triggers on the carbon steel revolvers had their backs finished in black oxide and their sides polished to a near mirror finished and left in the white. Stocks were oil-finished walnut with a diamond-shaped panel of checkering. Full-size target stocks came sometime later.

The Security-Six was an instant hit because in no small part its price was 16 percent below that of a S&W Model 19 and 25 percent below that of a Colt Trooper. Among those using the Security-Six were the U.S. Border Patrol; the former U.S. Immigration and Naturalization Service, U.S. Postal police, as well as numerous private security firms. Even the British Royal Ulster Constabulary Police Officers adopted it. Though in production only 16 years, more than 1.5 million copies were produced.

Variants included a fixed-sight version known as the Service-Six, the Speed-Six in either 2 1/2″ or 3″ barrel lengths, some very rare revolvers chambered in 9 mm Parabellum called the M109, some more chambered in .38 Spl. and a 6″ barreled version often seen with sportsmen.

Security-Sixes are not often found on the used market. Those that do show up are usually priced at from $250 for a well-used and well-worn specimen, to a little more than $300 for a more pristine copy.

The Security-Six was seldom seen on the target line. It wasn’t necessarily due to a lack of accuracy, but because the double-action pull was so heavy and gritty. The single-action pulls didn’t inspire confidence either, averaging more than 4 lbs. Both could be improved by a talented gunsmith, but by then you could have bought a Smith & Wesson or Colt. Ruger’s Security-Six was meant for those who needed a powerful, tough and relatively lightweight revolver to save their hides. It did so, splendidly.