From time to time, you may need to make video tutorials, grab the funny parts of a video or create video software reviews, then recording screen on Mac will be highly recommended for its high quality and high performance. Thus do you know how to record screen and audio at the same time on Mac? Don't worry about it. In this article, you will learn 2 methods to record screen on Mac with sound by using 2 different but feasible Mac Screen Recorder. The first one is called TuneFab Screen Recorder and the other is using the default apps on Mac called QuickTime Player. Let's go and read how to make it in a few steps.

1. How to Record Screen on Mac with Audio

TuneFab Screen Recorder is designed for recording screen and audio at the same time on Mac and save as multiple video formats such as MP4, MOV, M4V and more. With it, you can not only record the screen on Mac but also edit the video when recording with various edit functions, like drawing an arrow, adding a text and more. Apart from these powerful functions, there are Webcam Recorder, Audio Recorder and more available. 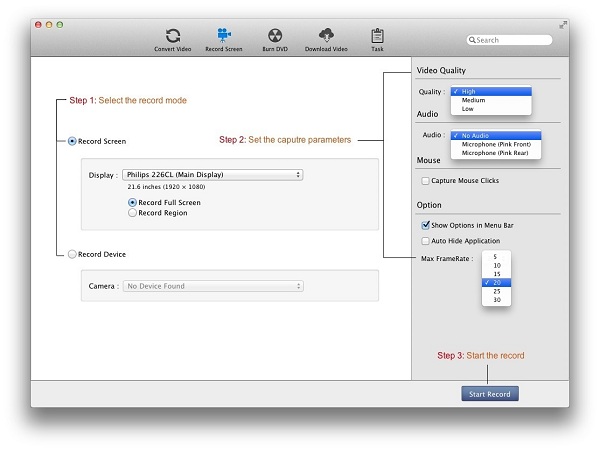 Get started with downloading TuneFab Screen Recorder for Mac by clicking on the button above and then installing it on your Mac. After that, run it on your MacBook Air, MacBook Pro or other Mac to get ready recording Screen on Mac with audio and you will see the main interface as below. Now enter to Video Recorder mode.

Step 2. Turn on Microphone or System Sound for Recording Audio

Before turning on Microphone, you need to fully install Audio Driver of TuneFab Screen Recorder for Mac on your Mac first. After that, on the main interface of TuneFab, turn on System sound or Microphone for recording your Mac screen with sound.

Customize the whole recording area are needed before recording. As you can see on the main interface of TuneFab Screen Recorder, there are 2 buttons available for options.

Hit to Full button, you can record the whole screen on Mac with sound so that you can free from drawing a recording area.

Choose the Custom button, you can choose the recording area size or select region or Windows for recording partial screen of your Mac with sound. 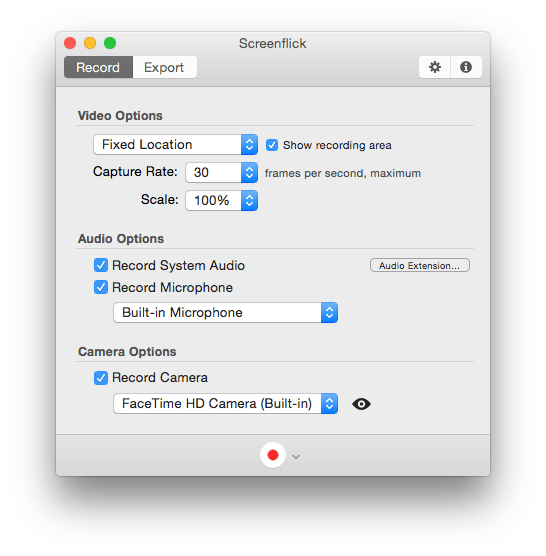 Step 4. Record Screen on Mac with Audio By Clicking to REC

It is the last step for you to make it. Now you can just click to the green REC button for recording screen on Mac. With 3 seconds countdown, you can record Screen on Mac and sound together.

For Free Trial version: You just allowed to record the screen on Mac with 3 minutes long video. With 3 minutes recording, you can fully evaluate both recording functions and video quality.

Besides, you can try the default way to record the screen on Mac with audio, using SoundFlower with Quicktime Screen Recording function to record Mac screen with sound. So that you can make up your mind on choosing your best way to screen record on Mac with sound. Keep reading and see how to make it. Free app inventor download.

Macbook has a built-in app called QuickTime Player, which is available for playing the multimedia files with a built-in function, the screen recording. However, if you record Screen with QuickTime Player, you may have found that it is hard for you to record screen with sound for QuickTime Player don't allow you to set the audio input as internal Microphone. So how to fix it? Keep reading.

Now, you've got 2 methods of record screen and audio at the same time on Mac. How do you think of recording mac Screen with audio now? Is it easier than ever before? As a matter of fact, using a Mac screen Recorder will be more helpful than using QuickTime Player for the various output format and video quality options. Here, tell us your feelings about this post or share it with your friends if you have any problems. That's all for today, see you next time.