Learn the traditional rules of the card game Skat, derived from Germany and popular throughout Canada.

Skat is a card game that’s been around for just over two centuries now, dating back to Germany circa 1810. It’s a fun trick-catching card game for 3 players with unique scoring and interesting card ranking rules that make it more complex than most of its trump-based cousins.

I’ve chosen to record the rules of this game for two reasons. First of all, it’s a moderately popular game throughout Canada, worthy of inclusion in our ever-growing database. Secondly, I recently finished up a series on the North American game of Scat, which is a completely different card game. Since finishing up that series last week, I’m already being asked to supply the “rules of Skat, with a k”.

Skat is regarded to be one of the best three-player card games in the world and unlike many games, Skat is actually designed for three and works best that way. Skat came to America with German immigrants, where it peaked in popularity in the 1940s.

So, without further ado… here we go!

How to Play Skat Card Game

This game requires exactly 3 players and a 32-card deck of 7s through Aces (remove 2s thru 6s). The rank of cards are a bit unique, so look them over carefully.

Notice the Jack is first, followed by Ace, then 10. The cards go in the usual high-to-low order after that.

Their point values, calculated at the end of each hand, are as follows:

Jacks may not be worth a lot of points, but they have a very special power. All Jacks are trump, all the time. No matter what trump the contractor declares to start a game, the four Jacks will be the highest ranking of all trumps. Also regardless of the trump suit called, Jacks rank highest to lowest in this order:

If the winning bidder chooses No Trump, called a Grand, only the Jacks are trumps, ranked in the order shown above.

The two cards in the middle are called the “Skat”.

Starting with the player left of the dealer, each will have an opportunity to bid for trump. Players will bid the number of points they believe they can catch throughout the hand. The lowest possible bid is 18, but the winning bidder must catch at least 61 points to win the hand (depending on the contract chosen).

Bidding will make more sense after you understand how to score hands in Skat. For now, you just need to know that bids continue around the table until one player has made the highest, uncontested bid. The player who bids highest wins the contract.

After the Skat is settled, the player will declare a contract, choosing trump. There are several contract options:

Grand: To declare No Trump, in which case only Jacks are trump. Declarer must catch minimum 61 points.

Null: There are no trumps. Declarer cannot catch any tricks.

Null Ouvert (Open): Declarer must play a Hand Game (no Skat), turn all his cards face up for others to see, and catch no tricks.

After declaring a contract, if the player has not looked at the Skat, and is not bidding null, he may also declare any of the following point multipliers:

Schneider: Announcing the player or defenders will win 90+ points.

Schwarz: Announcing the player will win all tricks.

Ouvert (Open): Announcing the player will win all tricks with their entire hand turned face up.

Player left of the dealer will always go first, regardless of bids, leading any card to first trick. Other players must follow suit if able. If not, they can play any other card; trump or otherwise. The highest trump played wins the trick. If no trump is played, the highest card of the suit led wins the trick. The player who won the trick will lead to the next trick, and so on, until all tricks are captured.

If a Jack trump is played, no matter what suit the Jack is, it is trump. Therefore players must follow suit by playing trump (Jack or trump suit), if possible.

This is the part that takes the most getting used to. After a game is over, the declarer adds up all points in the tricks he’s captured. If the total is 61 or higher, the declarer wins. If the opponents combined points are 60 or more, the declarer cannot possibly have 61+, therefore he is “set”. If the declarer announced Schneider, they must have 90+ points. If announcing Schwarz, all tricks must be captured.

Base Value of Contracts:

All multipliers are added together, then that total is multiplied by the base value. For example, in a Hand Game where the winning bidder declares Spades and Schneider with 3 Matadors, the score would look like this:

Null bids have static values and are unaffected by multipliers, making them the easiest to score. The value for winning or losing a null contract is as follows:

Matadors are the highest trump cards, in sequence. If trump is Diamonds, the Matadors would be:

To have Matadors “with” you is to have a sequence of them, starting with the highest J♣. If the player holds J♣J♠J♥, but no J♦, he is “with 3” Matadors. Holding J♣ but no J♠ is being “with 1”. If the bidder does not have J♣ or J♠, but has J♥, the highest two Matadors are with someone else, therefore the player is “without 2” Matadors.

Whether the player is “with” or “without” a number of Matadors, their hand will multiply by that many points.

Skat is not played with a target score to win. Instead, every player should be given the same number of opportunities to deal. Decide if you want a shorter or longer game, and set the number of deals per player proportionately. After all deals, the highest scoring player wins.

If you’re playing Skat for money – such as penny or nickel per point – the losing players pay the wining players based on the difference in their scores. For example, let’s say the game is nickle-a-point and the final scores are:

Want to learn even more about this fascinating card game? Check out the following links…

OBJECTIVE OF SKAT: Fulfill your contract by winning or losing tricks.

Skat is a popular German trick-taking game that accommodates 3 players. It was created in 1840 in Altenburg, Germany by Brommesche Tarok-Gesellschaft members. The game is a mixture of Schafkopf, Tarok (Tarot), and l’Hombre. Skat is not to be confused with the American card game Scat. Skat uses three hands with 3 active players, the fourth being the dealer who sits out. There are three different ways to play skat, which change the value of the cards: suit games, grand, and null.

The game was traditionally played with German cards which use different kinds of suits. Below outlines the corresponding suits.

Card rankings depend on which game the declarer wants to play.

No matter the suit chosen for trumps, the four Jacks are top trumps. Jacks rank in this order:

The four jacks are the only trumps, ranking in this order:

In suit and grand games, cards have the following point values: 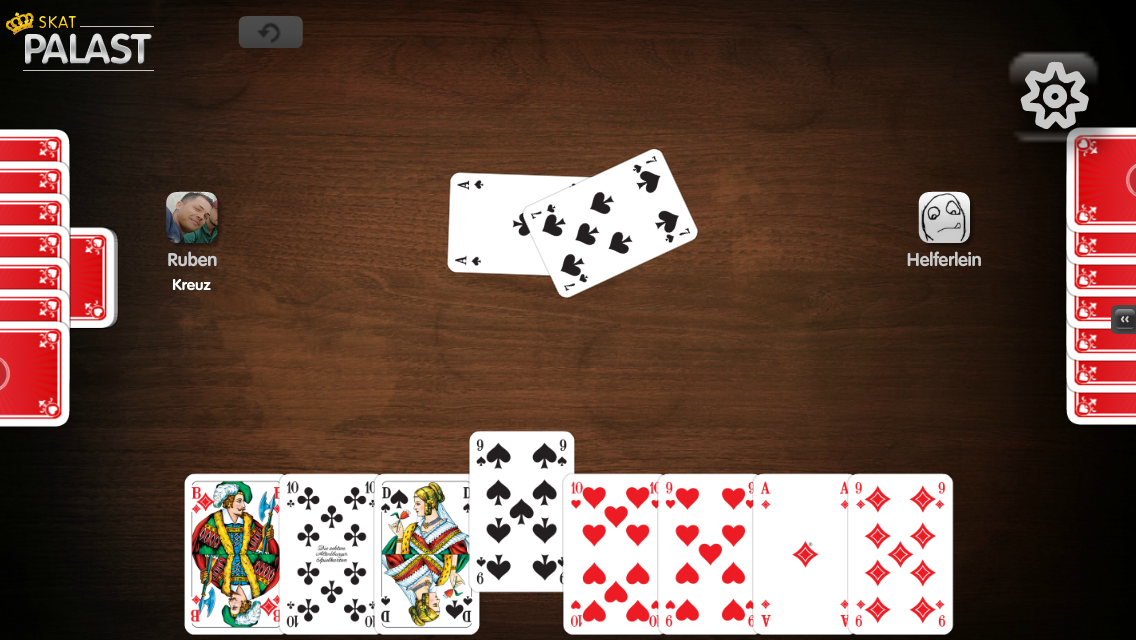 Auctions begin with F and M. M bids first, either passing or bidding (typically bidding the minimum of 18). F may either pass, and decide to not have the opportunity to be declarer, or say yes and match M’s bid. If F says yes, M may either pass or increase their bid. F decides whether to pass or match M;s bid again. This continues until either F or M drops out by passing. If a player passes they can no longer bid on the hand.

The second portion of the bid is between R and the winner of F and M’s bid. R must increase their bids as the junior, to which F or M must match. Whoever does not pass becomes the declarer, or the winner of the bid.

If M and R both pass, F may be declarer by bidding 18 or cards are thrown in and re-dealt.

The declarer has the right to pick up the two skat cards. Add them to hand and discard two unwanted cards face-down. The cards discarded can be the one’s picked up. After discarding, the declarer chooses their game. If the declarer looked at the skat cards, the contract is skat game. There are seven options:

Diamonds/Hearts/Spades/Clubs: A suit is declared as trumps, the declarer tries to earn 61 points.

Grand: Only jacks are trumps, the declarer tries to earn 61 points.

Null: No trumps, declarer attempts to lose every trick.

Player’s can choose to not look at the skat cards. However, the game is called a hand game, with the same contract options.

Declarers in suit hand games and grand hand games can up the stakes by increasing the point value of a game. Player’s may announce Schneider and attempt to win 90 points, Schwarz and attempt to win all the tricks, or Open and play with their hand exposed. This must be announced before the first trick.

Play moves clockwise. The forehand always leads the first trick and player should try to follow suit if possible. If a player is unable to follow suit they may play any card. Reminder, in suit and grand games jacks are trumps despite suit. For example, if the suit lead with is diamonds, jack of clubs is still the highest trump.

Tricks are won by the highest trump, if no trump is played, the player who takes the trick is whoever played the highest ranking card that followed suit. The winner of a trick leads in the next trick.

Declarers in suit and grand game win if they take at least 61 points (in card values, including the skat). Opponents win if their tricks combined is at least 60 points.

Declarers in Null or Open Null games win by losing every trick. Taking a trick is losing.

The value of these contracts is determined by multiplying the base value and the multiplier. The base value is dependent on the trump suit.

The multiplier is the sum of the following items:

*Every multiplier that is applicable counts.

The smallest multiplier possible is two.

Nul contracts are simpler to score, contracts have fixed values.

If the game value is less than the bid the declarer loses automatically. A number of points taken does not matter. Double the base value is subtracted from their cumulative score.