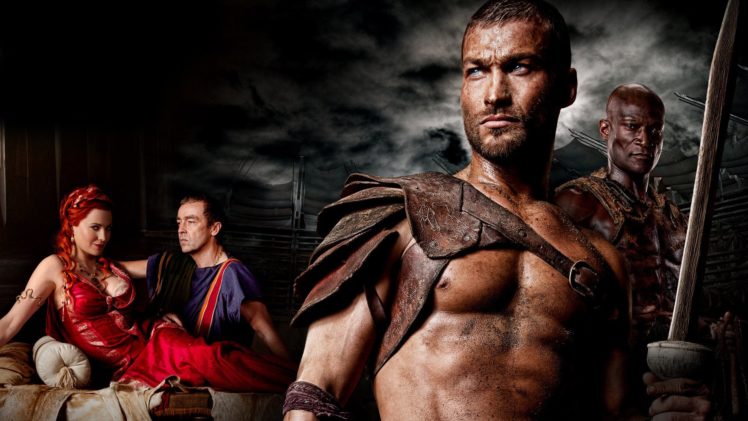 A Thracian warrior is captured and enslaved by the Romans, then placed in gladiator school, where he battles to save his life, gains his freedom and reunites with his wife.

Spartacus: Blood and Sand – American historical TV series, which began showing on Starz on 22 January 2010. Roman legate Gaius Claudius Glabr is furious because broke up with the Thracians, and calling them deserters, takes prisoner one of their leaders – Spartacus, turning him and his wife into slavery.
Spartacus in chains sent to Capua and his wife sold the Syrian traffickers. The prisoners must be killed by the Thracians in the arena during the festival, dedicated to father of Glabr – Senator Albino. However, Spartak wins his battle, and Quintus Lentulus Batiatus buys him for gladiatorial school.
The legend of the Thracian warrior Spartacus, who led the largest slave revolt in ancient Rome, is known to all from the school. The creators of the series “Spartacus” gave the audience the opportunity to plunge into the ancient world.
The series contains a large number of explicit scenes and scenes of violence.

After filming in early 2009 and promoting for some time, it was announced that Starz would premiere Spartacus: Blood and Sand on January 22, 2010.[11] On December 22, 2009, a month before it premiered, it was announced that the show was renewed by Starz for a second season.[citation needed]Gigabyte motherboard drivers windows 7.

On March 9, 2010, IGN.com reported that production of Season 2 had been delayed due to star Whitfield being diagnosed with early-stage non-Hodgkin lymphoma.[12] Due to the delay, Starz announced in May 2010 that it would be developing a six-episode prequel series, entitled Spartacus: Gods of the Arena, to allow star actor Whitfield to seek medical treatment.[13] The prequel featured both new and returning stars, headlined by John Hannah as Batiatus and Lucy Lawless as Lucretia. Star Andy Whitfield also briefly appeared in a voice-over role. Production began in New Zealand in the summer of 2010 and the prequel aired beginning January 2011