Glauciorsem rates this game: 5/5 A very successful attempt on turning the Super Mario franchise into a different gaming experience from the 2D platformers from the 1980s and 1990s! Easy-to-follow menus and controls lead the player into hours and hours of unnoticed gameplay along with funny and lighthearted dialogues. If you have never played any RPGs, this could be your door to playing Final Fantasy and other more complex of this genre since it's a rather light and simplified game. As for the storyline, it's the usual Bowser-kidnapping-Toadstool (or Peach)-princess-in-order-to-get-to-Mario, but the story gets as involving as the game gets addictive. I didn't play it in the SNES and I definitely would've played it more than once at the time it was released, for sure! To sum up, the whole charm of the Mario franchise at its best with its childlike and playful atmosphere rather than the usual darkness of the greatest RPG series (not that it's a bad thing by all means). Pontinho rates this game: 5/5 Rarely do we use the word “perfect” to describe a game, but in my opinion, Super Mario RPG is pretty damn close.

The game come out in 1996, had amazing 3D graphics developed by square and it was the last Mario game on the Super Nintendo. Even though the game was released out the console’s lifespan, the game still is a collector’s pick, and if you want a copy, you surely will pay more than one hundred bucks for it. But why exactly the Super Mario RPG kicks so many asses? Well, its kind a hard to pinpoint. There was a really unique story this time around, a ton of new characters introduced, like Geno, who makes its first and last appearance on a Mario game, and some really cool secrets.

For example, the locked doorway in monster town. If you paid 500 coins for some fireworks and trade with a little girl for a shiny stone, you can fight against the hardest boss in the entire game: Culex. I’m at level 28 at this point and already finished the game, but this guy can still beat the ever loving crap out me.

I guess it’s kind of what happens when you put Mario against a cameo straight from final fantasy I’m such a fanboy for this game. The story is a ton of fun, gameplay is out of this world and when you save the princess, the game says the end? No, she joins your group and does some ass-kicking of her ownwith a Frying Pan!

Just like girls are supposed to dojust kidding. Once you get your group together, your goal is collect all star pieces to repair star road. And the final one is at Smith’s Factory, where you fight against his power rangers wannabes. Every once a while, I take this game and spend a weekend leveling up and remember why I love the Super Nintendo. Square and Nintendo, Thank you!

Arbleich rates this game: 5/5 Isometric platformer meets RPG battles and leveling and they have a lovechild that enjoys making you laugh. This game has great graphics and story. The princess is kidnapped again and Mario goes to rescue her (per usual) but after beating Bowser things go south. A giant sword falls from the sky and smashes into the castle, sending Mario, Bowser and Peach flying across the kingdom. (There's a sword man falling from the sky! 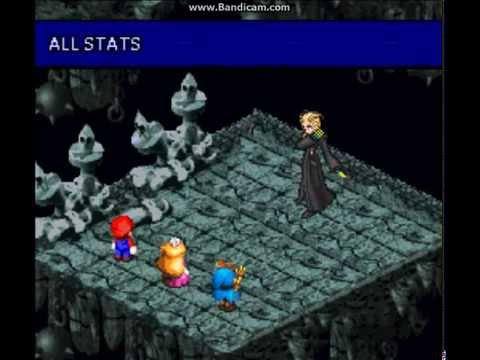 Watch Dragon Ball Z Anime Movie, TV-PG, English Dubbed & Japanese, Seasons:12, Episodes:291, Genre:Action/Adventure,Comedy,Fantasy. Dragon Ball Z also proved to be a rating success in the United States, as the premiere of Season Three of Dragon Ball Z in 1999, done by Funimation's in-house dub, was the highest-rated program ever at the time on Cartoon Network. Dragon ball z english. Prepare for the Dragon Ball Z experience of a lifetime! Beerus, the God of Destruction, wants to obliterate mankind! Only Goku, Earth's greatest hero, can ascend to the level of a Super Saiyan God and stop Beerus's rampage. Dragon Ball Z – Five years after winning the World Martial Arts tournament, Gokuu is now living a peaceful life with his wife and son. This changes, however, with the arrival of a mysterious enemy named Raditz who presents himself as Gokuu’s long-lost brother. Dragon Ball Z Special 2: The History of Trunks English Dubbed Dragan Ball Z Special 1 Bardock: The Father of Goku English Dubbed Dragon Ball Z Episode 291 English Dubbed.