First time on CD for three Motown albums from the early 70s, plus bonus tracks. Produced by Norman Whitfield.

Handpicked by top-level Motown writer-producer Norman Whitfield as a new outlet for the realisations of his creative mind, the Undisputed Truth debuted in 1970 with ‘Save My Love For A Rainy Day’ before going on to score significantly with the Grammy-nominated ‘Smiling Faces Sometimes’ and the original version of ‘Papa Was a Rolling Stone’, among others. Although their career was consistently overshadowed by the success of Whitfield’s main act, the Temptations, whose recordings they were frequently required to remake by their producer, the trio (who later became a quintet) nevertheless hit the R&B charts with 12 successful singles between 1971 and 1975, eight of which also made the Hot 100. Not a bad tally for any group, and one of which lead singer Joe Harris – who was with them from the beginning until their final recordings in 1980 – is justifiably proud.

Apart from the occasional anthology and random reissues of individual albums, the group’s Motown catalogue has been somewhat neglected in the digital era. Not anymore. “Nothing But The Truth” restores to catalogue the group’s first, third and fourth albums – “The Undisputed Truth”, “Law Of The Land” and “Down To Earth” – none of which has ever been issued complete on CD before, plus a selection of single mixes and non-album 45s. (Their second album, “Face To Face With The Truth”, has been issued on CD elsewhere.) The usual thorough track annotations by Motown authority Keith Hughes complement a lengthy essay featuring revealing quotes from Joe Harris, who was interviewed specifically for the project and gives it his personal endorsement. A vast array of illustrations help make the booklet as enjoyable to look at as the music is to hear. All in all, another important addition to our growing library of officially approved Motown collections.

The Undisputed Truth Law Of The Land Rar File Online 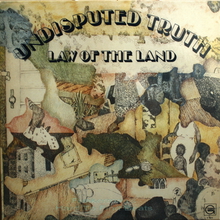 The Undisputed Truth Law Of The Land Rar File Free

The Undisputed Truth Law Of The Land Rar Files

Find album reviews, stream songs, credits and award information for The Law of the Land - The Undisputed Truth on AllMusic - 1973.