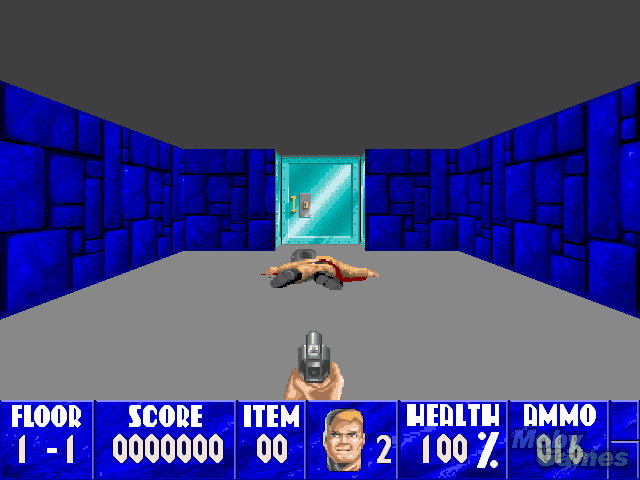 02.03.2006
- Hello, more then a year since last update. And about 3 years since last release..
Anyway here is a new release. It is much more like small patch. Don't expect anything special from it.
It adresses 2 issues:

14/12/2002
- Greetings!
NewWolf made it to version 0.72. It fixes Spear support (which was accidentely broken in v0.70 and video settings (yes you can run NewWolf in higher resolutions now)
Be cool!
NewWolf v0.72 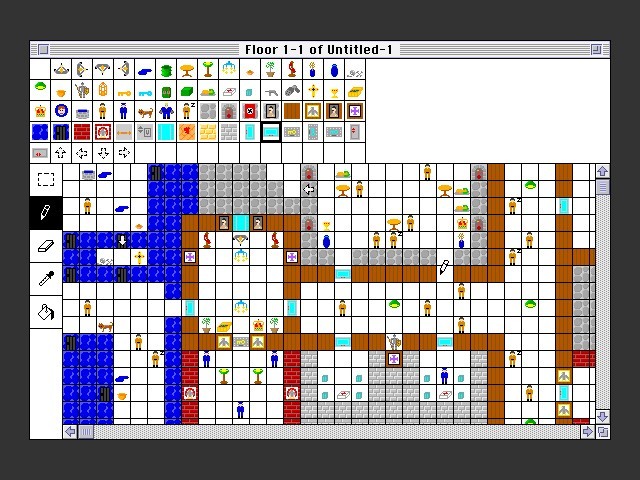 5/10/2002
- Hi everybody! I'm terribly sorry about the last few versions (level exit bug). The source is that I forget to include newest version of sndlib.dll in distribution pack. Now it is there and the problem must be gone. I also made some compatibility cahanges and now you can run NewWolf under Wine (atleast I could, see screenshot).

Have fun! In the near future I'll move to the new hosting place, cause this site is Soooo S-L-O-W-W.
Many changes to core engine will be available in the next version, so stay tuned.

06/08/2002
- Hei! Another update!
I've got some bug reports in the last time, so I'm trying to correct an error. You probably don't need this update if you can play NewWolf, but I recommend all to get it and give me feedback if it chashes!

05/08/2002
- Hello all Wolfesntein fans! NewWolf version v0.65 is out! Get it here
Its main feature is better compatibility! Better Spear of Destiny compatibility and Wolf3D v1.1 (and 1.2 too) compatibility (it will autodetect which version do you have!.
Again use NewWolf forum for comments and suggestions.
Thank You!

29/07/2002
- WOW! New version (v0.6) of NewWolf is out! Get it here
It features Load/Save and better Spear of Destiny support (will autodetect which game you have).
Please leave your comments, suggestions and bug reports in NewWolf forum.

1/01/2002
- ImfTools v2.0 are released. GPL'ed source code also present, look for it is the same archive. It is a must for everyone who use imftools! Many bugs fixes & new features! Treat it as a New Year's gift!
- New NewWolf release will be ready very soon. Save game feature will be it's main feature!

22/12/2001
- A sequel to ImfTools is released - ImfPlayer. It needs WinAMP player to play IMF music. Source code is also available. (under GPL license)
- New Return to Castle Wolfenstein project is started: Special forces of World War 2. I will be a bot/tanks coder there! You can learn more about it here: http://www.firewallfortress.com/specialforces.html

25/11/2001
- WOW an update..
Thanks to all of you who are interested in my project and write me e-mails/forum messages. I've read it all. I just haven't much time to answer everybody (;
There is no big progress in NewWolf project. I write it when I have time, but the next version (perhaps already with network support) will not be ready earlier then in january. Current version 0.51b fixes some bugs with Windows XP.
- Finaly I've decided to release the source to NewWolf. It can be compiled using MS Visual C++ 6.0 (Service Pack 5 is recommended, but not required). It is distributed under GNU GENERAL PUBLIC LICENSE. If you'll make anything of interest with it please let me know!
- FAQ is added.

7/07/2001
- Finaly I've updated this site & NewWolf. Now it has support for shareware version of Wolfenstein3D! It will autodetect your version!
Note: You need Wolf version 1.4 (full or shareware). If you don't have Wolf v1.4 you can download Wolf 1.4 shareware from this site!
Another Note: From now on NewWolf does NOT requires you to put Wolf3D data files to basewgl/data dir. All you have to do is to unzip NewWolf to your Wolf directory. It will not owerwrite any of your Wolf3D files, but it is recommended to create a backup of your Wolf3D just in case.
Note for 3dfx Voodoo 1 and 2 owners: If you can't run NewWolf, you can download an OpenGL library from this site. Simply unzip it to the NewWolf directory. Warning: Do NOT put this file to WindowsSystem directory or you will experience some problems with other software.

12/05/2001
- New version released. It is much more stable! If you had problems with previouse versions you can try this version!
- The counter shows that over 500 people visited my page, thanks to all of them!

22/04/2001
- Thanks to all of you, who downloaded & tested my project; as well, as Wolf tools.
Special thanks to those of you, who expressed their opinions on my forum & on the Wolfenstein3D fan club .
I didn't expect such a big feedback!
- Another version released (0.39).
The most remarkable feature of it is a full-featured automap!
Take a look at it in the screenshot section!

12/04/2001
- Happy Easter to all!
- Today it is 40 years, since Yuri Gagarin made his flight.
Congratulations to all Russian people: 'С днем космонавтики!'
- Finally, ImfTools are released!!! Grab it form Download page!
Now Wolfenstein music also can be edited.
- Along with ImfTools Jpal2bin project released!!! Grab it form Download page too!
It allows editing Wolf3D palette!
- New entries in Source Ports table (links page)
- New features in NewWolf, specially for those of you, who will play with ImfTools:

08/04/2001
- Added a table of all Wolf3D source ports. If you have info, I don't have, please let me know.
- New version released. I finally fixed this sound problem.
fnjordy, I released sound module src, get it on download page!

31/03/2001
- Project name changed. After a request of other WolfGL project http://www.sourceforge.net/projects/wolfgl author,
so we are 'NewWolf' for now, hope nobody objects it. So long it is a working name as a WolfGL. May be project will be renamed to Wolf4ever some time. After all it definitely not a WolfGL because I want to add a software rendering features to enable people without OpenGL cards to play it on NT and Linux, besides I want to add Direct3D support, so it will be definitely not a WolfGL. If anybody has a good idea, feel free to mail me!

Aseprite for Mac lets you create 2D animation for videogames. From sprites to pixel-art, retro-style graphics, and whatever you like about the 8-bit and 16-bit era. Basic Elements of a Sprite A frame is a single still image in a sprite. Adding and altering frames creates a. How to compile Aseprite on the mac. So i want to try and compile aseprite on the mac because I want to use it for pixel art. I don't know how to do this and the instructions on the Github page are too hard. Can anyone put this into easy step by step instructions, please. Remember the good old 2D games and their beautiful sprites? With Piskel you can create. Aseprite for mac. Aseprite is a pixel art tool that lets you create 2D animations for videogames. Aseprite is a pixel art tool with which you can create animated sprites & graphics. Here you can buy Aseprite with updates for the whole v1.x series. It includes Windows portable.zip, Windows installer, macOS app bundle, Ubuntu.deb package, and a Steam key. More information in the FAQ: What do I get when I buy Aseprite?